A fan fiction by Katara Mallory


Author’s note: Before we begin, let me make it clear that I do not own any of the One
Tree Hill characters. Nor do I own the name of the PC game Wing Commander Pro-
phecy. This is just a fan fiction I wrote which combines the CW teen drama with a
computer game. Enjoy the story! Have fun!

As our story begins, it is the year 2669, the war with the alien Kilrathi is over
but now a new hostile alien menace known as the Nephilim threatens the Terran Con-
federation. The One Tree Hill gang has joined on with Confed as fighter pilots and has
been assigned to the TCS Midway, a colossal capital ship the size of an aircraft carrier.
Under the command of Captain “Whitey” Durham, a former basketball coach at Tree Hill High, the Midway is on a mission to secure Confed space. Lt. Commander Haley
James-Scott and her Wolfpack Squadron are on a reconnaissance mission through
enemy territory when they are met by a wing of enemy fighters…

Haley: Look out, Skills! He’s on your tail!

Skills: I can’t shake him!

Brooke: Hang on, Skills! I’ll get him!

Brooke shoots down a Moray-class fighter.

Nathan: O.K. Lucas, You take out the ones on the left.

Nathan: Good work, Lucas! This one is mine!

Nathan shoots down a fighter.

Haley: Rachel, you and Mouth take out the enemy starships.

While Haley and the others deal with the fighters, Mouth and Rachel fire their
missiles, rendering the enemy starships helpless. Soon the battle is over and all ships
return to the Midway.

Haley: You know, you did a hell of a job out there yesterday. Keep it up, and you may
make Wing Commander.

Brooke (smiling): I look forward to that challenge.


End of Chapter I

It is happy hour on the Midway. All pilots are in the lounge, having drinks and socializing when…

As soon as the pilots are assembled in the Briefing Room, Captain Durham
addresses them.

Captain Durham: As you were. Our scanners have picked up an enemy cruiser on the
lookout for us This cruiser and its fighter escorts must be stopped before they reach the
Midway. Lt. Commander Scott will lead a wing of Vampires to eliminate any and all fighter cover while Private Gatina leads a wing of Devastators to take out the cruiser.
Any questions? Then hop to it. I wish you God’s speed.

All fighters take off from the Midway’s launching bays and engage their autopilots.
Finally they reach the nav point and prepare to engage the enemy.

Skills: I’ve got this one!

Skills shoots down a Squid-class interceptor.

Brooke: Lucas, you’ve got a bogey on your tail!

Brooke shoots down a Squid.

Lucas: Haley, look out behind you!

Lucas: Alpha Wing to Midway. Haley has ejected from her damaged fighter. Please send an SAR ship to pick her up.

A short time later, Haley is taken out of her escape pod and rushed to the infirmary.
As the pilots await news of her condition, Mouth steps out of the infirmary.

Nathan: How is she?

Mouth: Well I don’t like to spread bad news, but Haley has been mortally wounded as a result of a direct hit from an enemy fighter. She has internal injuries and has lost too much blood. There’s nothing they can do for her. She’s asking to see Brooke.

Haley: It’s too late, Brooke. My fighting days are through. But part of me goes with you.
Now listen to me. You must command Wolfpack Squadron in my place. You’ve been trained well. You’ll make a fine Wing Commander.

Haley: Don’t cry, Brooke. Not for me. I am at peace now. Only the survival of Earth matters. But our ties can never be broken, even in death. You must be a strong leader,
Brooke. Peyton and Nathan will help you. You must save humanity from extinction.
My time has ended. Yours has just begun.

And with that, Haley dies, leaving Brooke in tears. Brooke leaves the infirmary.

At the funeral, Haley’s coffin is being prepared to be jettisoned into space as all pilots and crew look on.

Captain Durham: We will never forget Haley’s sacrifice as we commit her body to space.

All pilots say their goodbyes, except Brooke who is still crying as Peyton embraces her.
Peyton: Now, now, Brooke. Tears won’t bring Haley back.

Brooke: Yes, but she was my friend. I’m gonna miss her.

Peyton: I know. I miss her too. Haley was a good pilot----a great Wing Commander
and an even greater friend. We all loved her. But she wouldn’t want us to grieve un-
necessarily. We have to be strong now, especially for Haley. The fate of our world depends on us. You’re a Wing Commander now, Brooke. And it’s up to you to lead
this squadron in Haley’s place.

Nathan: She’s right, Brooke. Look, I know how much Haley meant to you. But you can
avenge her death by becoming our new Wing Commander. We need your leadership if we’re going to win this war. This alien threat must be neutralized once and for all or Earth is doomed.

Brooke: Oh, you guys are so kind to comfort me in this way. Haley has been kinder
to me than anyone else in my entire life. Now she’s gone. Oh, what shall I do now?

Nathan: Do what Haley asked before she died. Lead us, Brooke.

Peyton: Do it for Haley.

Peyton: Perhaps this will cheer you up. If you’ll come with us, there’s something that may interest you in the landing bay.

Later in the landing bay, Peyton, Nathan, and Brooke feast their eyes on a Vampire-class starfighter with a red stripe on the wing-----the same ship once flown by Haley!

Brooke: Wow! I can’t believe it! It’s…it’s Haley’s ship! And it’s really here! But how?

Peyton: She was found floating in space after Haley had ejected. An SAR had her towed
back to the Midway where the technicians made repairs.

Nathan: Haley would have wanted you to fly this ship. She’s all yours now.

Brooke: Unbelievable! Haley’s fighter----mine! I’ll take good care of her. And I will lead this squadron to the best of my ability. I accept the rank of Wing Commander in memory of Haley.


The following day, Brooke, in her new rank, addresses the pilots…


Brooke: I have been named Wing Commander in Haley’s place. It was her last wish.
As squadron leader, my job is to make bad-asses out of you. To this end comes our next
mission which is of the utmost importance. We’re gonna make those alien bastards wish
they were never born. Our task is to attack a Nephilim convoy, taking out every fighter and starship in the fleet. Any questions?

The room is silent.

Brooke: Good. Then let’s get out there and kick some alien ass!

The entire squadron shouts, “Hooray!” All fighters launch from the Midway’s launching bays and engage their autopilots until they reach the nav point. Waves of
Squid fighters await them. Brooke and Lucas pursue a Squid.

Brooke: Stand back, Lucas! This is my kill.

Brooke shoots down the Squid fighter.

Peyton shoots down a fighter.

Peyton: Lucas! Behind you!

Brooke: Nathan, you give your brother a hand.

Brooke: Rachel, you and your group take care of those starships. The rest of us will
handle the fighters.

Rachel: Roger!
With all fighters destroyed and starships rendered powerless, the pilots return
to the Midway.

Captain Durham: Congratulations, Commander Davis. Haley would have been proud.

Through the windshield of her Vampire, Brooke sees a ghostly image of Haley,
smiling gratefully. Brooke smiles back as she prepares to land. All fighters prepare to
land aboard the Midway. Although the war is far from over, the human race is safe
-------for the moment.

Now look below and see what could have been the trailer for a movie!

BASED ON THE FAN FICTION BY
KATARA MALLORY 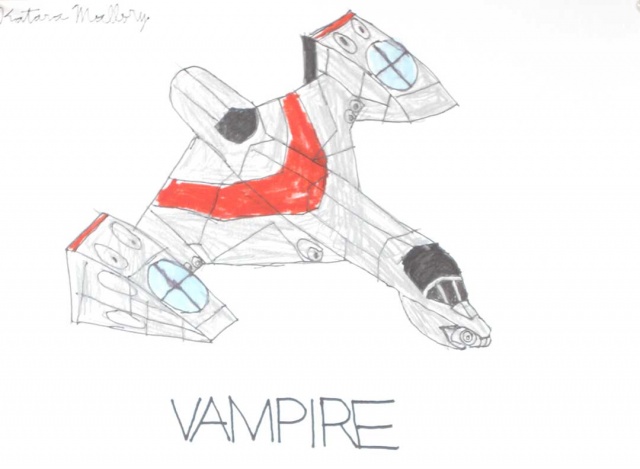